B-side of My Baby Loves Me

B-side of My Baby Loves Me 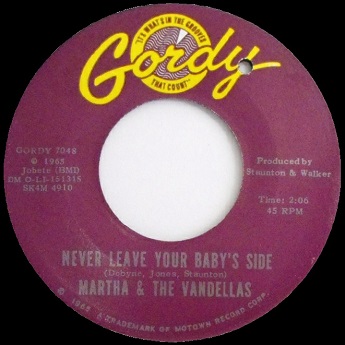 Happy New Year, readers! It’s fun to be starting 2015 at the same time as I start to write about 1966, and what a treat this is for an opener; one of the sassiest records we’ve covered so far, absolutely dripping with attitude in a way we haven’t seen since the best of Mary Wells and won’t see again until the arrival of Gladys Knight. The sass, it burns!

Never Leave Your Baby’s Side provides, quite literally, the other side to Martha and the Vandellas’ gorgeous My Baby Loves Me; where that one swept you along on a bumpy carpet of silky balladry and dimmed lights, this one is much more in your face, the group’s unique soul stew front and centre, showing that none of Martha’s trademark energy had been dissipated during a tempestuous and largely unproductive 1965.

The list of great Motown B-sides is already as long as my arm, even if for many people we haven’t even properly got to the really good stuff yet, and this one is another fine addition. It really illustrates the strength in depth of the Motown machine; never collected on a studio album (despite effectively being a title track to their masterpiece LP Watchout!, released later in the year), largely cut adrift (even in the CD era) until The Complete Motown Singles: Volume 5 came along, and ill-served even then (as we’ll soon see). And, also, brilliant.

SIT AND CRY AND WONDER WHY

There are two different versions of this in circulation, alternate mixes with what sound like subtly different lead vocal takes, one found on The Complete Motown Singles: Volume 5 and the other on the Vandellas’ 50th Anniversary: The Singles Collection, although neither publication’s liner notes makes note of the difference; Don’t Forget The Motor City says that the TCMS 5 version is an alternate mix and the anniversary set contains the actual 7″ version. They’re both great; I think I prefer the TCMS 5 one, but that could just be a few extra years’ familiarity talking.

In both flavours, it’s really quite remarkable just how “out there” this record is; neither mix sounds particularly clean, both are muffled and distorted and muddy, featuring disembodied bits of backing vocals and horns and strings and drums and things (snow chains again? Surely not) sweeping in and out of the general fog, sticking their heads above the parapet for a minute before disappearing back into the murky depths of the band track.

Most strikingly, both versions feature a noticeable skip at 1:20, when Martha and the girls make an apparent false start, as if they’ve come in a measure too early, before aborting the attempt and starting again –

– except that it’s in both versions, with two different vocal takes, so unless the backing vocalists had messed up and the studio boffins couldn’t remove that bit from the only existing tape before Martha overdubbed her lead or something, well, maybe it was intentional after all, or at least a happy accident kept in for serendipity’s sake. Who knows? The point is, this is a raggedy sort of a record, as rough and unpolished and full of snags as a horn-and-string-laden mid-Sixties cut from one of Motown’s greatest divas could ever be.

And over the top of it, here’s Martha Reeves, apparently singing from the prow of some half-seen ship in the night, occasionally struggling to make herself heard over the glorious din, and it’s incredible. The recording of Martha’s signature song, Dancing In The Street, had been beset by technical problems, a careless tape op wiping Miss Reeves’ (by common consent excellent) first vocal take, just as everyone in the studio was high-fiving each other. The fallout – Martha having to try and deliver the same magic a second time straight away – resulted in a great vocal, some genuine irritability and even anger bubbling away under the surface. Never Leave Your Baby’s Side is the closest she’s come to doing it that way again; she’s furious.

This is the story of a woman scorned, but it’s no wishy-washy lament from a crushed young woman in a darkened bedroom, as it might have been in the hands of Diana Ross. Instead, this is a warning, a shot across the bows from a jilted bride whose own poured-out scorn is bordering on the vituperative, and quite rightly so. There’s no hope of redemption here, no shades of grey. This one simply boils right down to all men are bastards, hormone-driven boys, incorrigible horndogs who are just waiting to cheat on you as soon as your back is turned. For the narrator, the obvious solution is, well, obvious: now you know the score, ladies, don’t you dare turn your back.

It’s a testament to Martha’s supreme skill here that she remains completely sympathetic even while she’s actively telling me I’m a philanderer-in-waiting. She’s scarcely ever been less troubled by keeping to a melody, colouring wildly outside the lines in places, sometimes giving it both barrels, sometimes doing a semi-spoken word rant, spitting out her words with such venom you can almost feel the flecks of spittle from the speakers… and yet somehow still feeling almost languid in her slow-paced, self-assured delivery, which only heightens the bitter sting when the backing singers shout their chant of “Watchout!”

But this is Martha, and so where in lesser hands this might have degenerated into free-jazz scatting and slippery, hard-to-catch wildness, she knows exactly how far she can stray from the (splendidly catchy) tune while still getting its essential essence across to us, pulling a whole bunch of crazy vocal stunts but always keeping one hand on the wheel. It’s as whistleable as any Vandellas song we’ve covered so far, and never less than utterly compelling; immediately before that weird time-skip, she delivers one of my all-time favourite Motown call-and-response bits:

VANDELLAS:Don’t leave him alone…
MARTHA:…’Cause when you get back, he might be GONE!

The return to both the heavier beats and the heavier themes of the earlier Vandellas’ best material is a welcome one; this is a record at once ominous and impressively demanding of your attention, neatly illustrating not only where they’ve come from but also where they’re headed. Especially their superstar of a lead singer.