B-side of Money (That’s What I Want)

B-side of Money (That’s What I Want)

(Released in the UK under license through London Records) 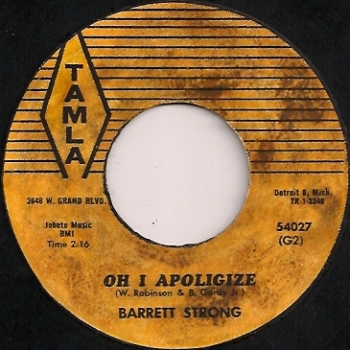 This follows the same formula as the very first official Motown single, Marv Johnson’s Come To Me / Whisper in having a slow, gospel-tinged, piano-heavy doo-wop number as the flip of a more upbeat R&B pop smash.

Just 18 years old and still in high school, Barrett Strong had no real desire to be a solo singer – like Eddie Holland, he often got nervous behind the mic and disliked live performances – and the A-side here was the strongest (ha) thing he’d ever do. You’d think, then, that being stuck under one of the great Motown singles would mean that Oh I Apologize suffered by comparison, but in fact, staggeringly, it’s almost every bit as good.

Completely different, of course. The confidence which permeates Money (That’s What I Want), which made that song such a success, is still present in spades here, but the raw attack employed by Strong and the entire band on Money is replaced with something quite new here, a confident, measured performance where the band and the backing singers all find, and use, precisely the right touch. 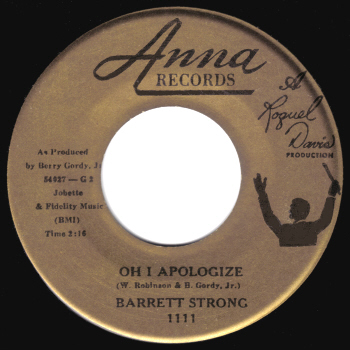 Strong is superb here, too, using his new-found belief and digging to the very depths to find an excellent gospel-inflected vocal performance, redolent of the early work of later Motown signing Marvin Gaye. It’s really rather special.

Nowadays, everyone in the world knows Money and almost no-one knows Oh I Apologize, but between them these two Barrett Strong sides contain the foundation stones of everything the Hitsville USA legend was built upon – great songwriting, a world-beating band knowing what they could do and (more crucially) the difference between that and what they needed to do, near-perfect arrangements, and a buzzing energy and confidence that goes far beyond just singing loud and playing hard, and into the realms of knowing a record’s going to be good.

It would be at least another three years before Motown consistently delivered singles approaching this level of quality, but this pair of sides is such a major leap forward compared to what went before that Barrett Strong – reluctant, stage-shy Barrett Strong – should really be considered the first great Motown artist.