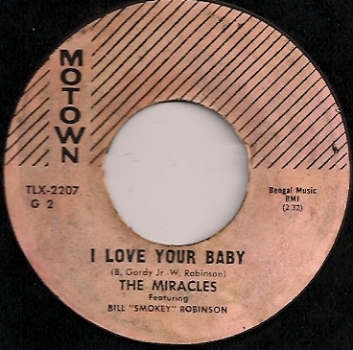 After the soaring, lovely Bad Girl, this somewhat ill-considered B-side sends the listener crashing back down to earth with a bump. It’s a lighthearted R&B number, not outright comedy in itself but very obviously influenced by the comedy R&B of the Coasters and their naff novelty hits like Yakety Yak and, in particular, Charlie Brown.

Anyway, for what it’s worth, this record isn’t maybe as awful as I’m painting it to be, but it’s not great; an ominous low sax solo gives way to Smokey telling a banal story about approaching his girlfriend’s father for permission to date her, and then in the chorus her dad (played by bass vocal Pete Moore) retorting in a ridiculous comedy voice “you’re crazy”, to which Smokey squeaks in an ear-splitting falsetto “I’m crazy?”. Dad then intones (again in a silly bass voice at least an octave too low for Moore’s actual range, at least for speaking purposes) “Who makes you think that it’s only YOOOOOU?”, and Smokey shouts “Your baby, your baby!”.

It’s a plotline that doesn’t make a great deal of sense, all told.

Two things become clear from listening to this one. Firstly, Smokey (who, again for those joining us late, was just nineteen years old at this point) didn’t yet have enough confidence in his own songwriting abilities to keep polishing his own sound – the sound displayed on Bad Girl – and was instead ploughing the same comic doo-wop/R&B-pop sound of the Miracles’ first, pre-Motown single Got A Job, itself an “answer record” to (and ten times better than) the Silhouettes’ Get A Job. Now, I Love Your Baby is considerably more listenable than those Coasters records cited above, but not by much, and it’s a shame to see one of the great individual voices and songwriters pressed into service making low-rent riffs on other people’s hits.

On that note, of course, it may not have been Smokey’s idea to try and follow in the footsteps (or more accurately, ride the coat-tails) of another act; Berry Gordy’s oft-cited rule of thumb during the early days of Motown, laid out explicitly in the liner notes to The Complete Motown Singles: Volume 1, was that if something was selling within a day’s drive from Detroit, Motown would have its own competing version in the stores within the month. So maybe Smokey – who is after all credited as cowriter on both this song and Bad Girl with Berry Gordy – was under specific instructions to make a Coasters soundalike. In which case, well, that brings me on to the second observation, which is this:

If you combine this record with Got A Job and the awful “Ron & Bill” comedy side-project single It (which, it might be clear by now, I’m not fond of), it’s entirely possible that at this point Smokey and the Miracles may well have actively welcomed such a move, may well have actually wanted to be the energetic, light-hearted comedy doo-woppers they seemed to be leaning towards becoming. Bear in mind, obviously, the Miracles didn’t know they were going to go on to carve out their own place in music history and become the bloody Miracles, one of the best groups of all time, so it might be that a niche role and a steady career as a sort of comedy doo-wop/pop crossover act seemed like an appealing prospect at the time.