The first single released by the Miracles in over four months, and the first product of the sessions which would go on to form their second album Cookin’ With The Miracles (their first LP, Hi! We’re the Miracles, one of the earliest Motown albums, came out at the same time as this single), this was a hotly anticipated record, both among music fans and within the Motown company. The label pushed the boat out to promote this one, perhaps mindful of the lacklustre chart performance of the Miracles’ last effort, Ain’t It Baby; this single marked the first appearance of the yellow/burgundy/silver Tamla “globes” label, as well as Tamla Records’ first-ever picture sleeve.

The result, rather unexpectedly, was an alarmingly poor chart performance – this A-side scraped the Billboard Hot 100 for a single week, limping to number 97 before disappearing altogether – but it did yield Motown’s first double-sided hit, as Mighty Good Lovin’ – initially tucked away on the B-side – outperformed Broken Hearted on the charts, picked up more radio play, eventually matched Ain’t It Baby to within a couple of places on both the pop and R&B charts, and ended up making T 54044 the first Motown double A-side.

(Ironic, given it was the first Tamla record to prominently feature the title of the A-side emblazoned, twice the size of the B-side, on a smart picture sleeve (left), but there we are.)

Both sides of this single are pretty fine, though. The public was right – Mighty Good Lovin’ is the better song – but this one is good stuff too. A quirky, midtempo pop/R&B number with very heavy traces of country & western, and absolutely drenched in strings – slightly too much, actually, and to the detriment of the song in places, as a jaunty high violin part threatens to send the whole record into bland MOR Radio 2 territory, only rescued by a supreme effort on Smokey’s part to tone down the saccharine and keep things on track – it’s a lavish, expensive-sounding production, and the song underneath it is a strong one, a noticeable step forward from the group’s earlier work.

Which is not to say it’s a better record than the magnificent Way Over There, or even Bad Girl, but it shows a growing sophistication in Smokey’s songwriting and arrangements, and as a song it’s leagues above the simplistic likes of Shop Around. 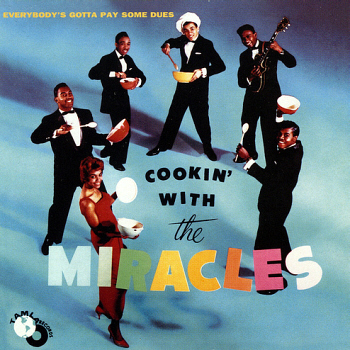 Smokey’s voice is noticeably stronger, too, and indeed the 21-year-old lead singer’s performance is the best thing about this record, sweetly soaring, well-judged and nigh-on perfect. (William Robinson had received his nickname in part as a result of a childhood love of westerns, and so it’s quite appropriate that he should now turn in one of his finest vocals to date on such a C&W-inflected record). The bit at 1:21 when the strings kick up a level and he sings: Ooh / Maybe you don’t know it, girl / So let me just remind you / That I’ll still love you, girl / And I’m gonna find you is one of his best deliveries so far, and it still sends a chill down my spine. The Miracles, reduced here to providing a straightforward chorus of backing vocals in the style of the Rayber Voices on Motown’s earliest records, carry off their task with aplomb. It’s a decent song, but sung beautifully, well enough to raise the record above the level of the material.

In short, it’s easy to see why Motown thought this would be the hit, and overlooked the earthier, ballsier, more direct B-side as a result. It wouldn’t be the last time Motown would misjudge the relative strengths of a pair of Miracles sides and see a B-side healthily outperform the nominal A-side on the radio and in the charts; the beautiful You’ve Really Got A Hold On Me, one of the Miracles’ best-loved recordings, started out as the flip side of the rather less well-known Happy Landing in November 1962.