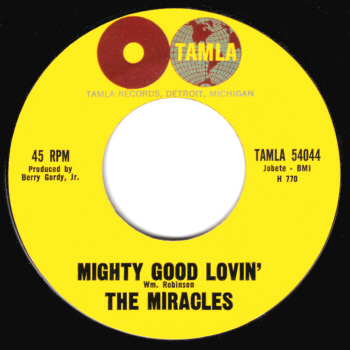 Unlike the notional A-side, Broken Hearted, which was very much a product of the latest recording sessions for the Miracles’ second LP Cookin’ With The Miracles (though the single version of Broken Hearted is different from the one which eventually turned up on the album), showcasing the group’s newfound maturity and developing sound, Mighty Good Lovin’ was apparently never intended to be anything more than a throwaway B-side. Ironic, then, that this raucous, danceable R&B rocker should turn out to eclipse the syrupy but earnest balladry of the original A-side.

Right from the off, this is something different, opening with a pounding, dirty guitar riff that immediately grabs your ear and makes you pay attention, before breaking into a three-quarter tempo R&B/rock crossover featuring Smokey wailing at the top of his voice (in volume and range), the closest thing the Miracles ever recorded to their mega-hit Shop Around.

Except that it’s probably a better song than Shop Around. It’s certainly more sophisticated, built around that central guitar riff which never lets up, instead finding itself augmented by vicious, exhilarating bursts of sax and horns, and a great backing-vocal performance from the rest of the Miracles which frees Smokey to do his thing to full effect.

So, yeah, it’s a fine record. It’s not a Miracles classic, not by Smokey’s rarified standards, and it’s not without its problems – it’s a trifle repetitive, and (most uncharacteristically for its writer and lead singer) it doesn’t really go anywhere having made such an explosive start – but it’s plenty of fun nonetheless.

It wouldn’t be the last time Motown would misjudge the relative strengths of a pair of Miracles sides and see a B-side healthily outperform the nominal A-side on the radio and in the charts; the beautiful You’ve Really Got A Hold On Me, one of the Miracles’ best-loved recordings, started out as the flip side of the rather less well-known Happy Landing in November 1962.