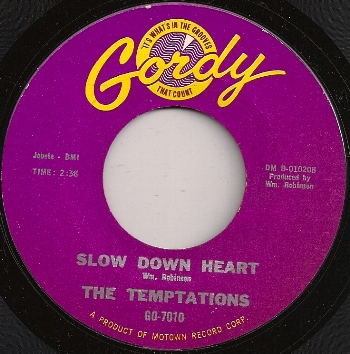 Considerably better than the A-side Paradise, and not only because it doesn’t have Eddie Kendricks and his wayward falsetto doing a poor approximation of Frankie Valli all over it, this B-side was also the first time the group cut material written by Smokey Robinson (who also produced this side).

The association between Smokey Robinson and the Temptations would go on to create some of the best and most successful of all Motown records, but while Smokey was already one of Motown’s top writers, he was still finding his way as a producer in 1962, and had only been “assigned” a couple of acts to work with – so the partnership that would eventually give the world My Girl wasn’t ready to be set in stone just yet.

Hearteningly, this B-side also shows that despite the mis-step of the sanded-down, smartened-up Paradise, a concerted effort to land a hit on the pop charts, Motown hadn’t completely smoothed the endearing strangeness out of the Temptations just yet.

Smokey takes the group through a weird concoction that’s part midtempo R&B, part Forties radio jingle, and never quite sure where it’s going; the backing is similarly confused, featuring flutes, horns and (especially) a cod-militaristic, quasi-Latin drum loop that runs throughout the entire song (save for an apparently experimental burst of driving 4/4 right near the end, which is quickly abandoned in favour of the familiar beat and fill) and sounds like the sort of pre-programmed beat you’d find on a cheap keyboard. (This isn’t meant as a criticism, incidentally – some of my favourite records, etc. – but it does confuse me, the backing and the vocals together calling to mind two completely different imaginary pictures all at once: purple crushed velvet, Afros, frilly shirts and a smoke-filled Seventies lounge club on the one hand, and finger-clicking street-corner doo-woppers with processed hair on the other.)

The vocals are both beautiful and instantly dated, but because of those vocals, it all sounds unexpectedly pretty. Paul Williams gives a splendidly impassioned lead, hoarse and throaty but still keeping it all together, while Eddie Kendricks – vastly more disciplined and sweet-sounding than on the A-side – leads the rest of the group in a series of high harmonies (with Melvin Franklin’s rich, deep bass keeping them tethered to the Earth, as ever), with a flute and sax break at 1:22 (complete with a series of “Hey!” interjections from the group), and an unexpected and lovely chord change in the middle.

Smokey the tunesmith is on fine form here; dated and simple it may be, but it’s also very clever, turning the expected arrangement (and the arrangement used on the A-side) on its head by using the high vocals as the anchor, driving the tune along, helped by that barely-changing drum pattern, and having Paul’s baritone – and the flute and horns – play against them, loosely swooping all over the top, given room to breathe. Not for nothing would Robinson forge a reputation as the Temptations’ master craftsman: first time out, on a supposedly throwaway B-side, a frothy, fun little sketch that wasn’t going to pull up any trees, his ideas on how to best play to the group’s strengths were already years ahead of anyone else the Temptations had worked with up to this point.

Sadly, Smokey wouldn’t be given the chance to take this job on for real just yet; it was the Temptations’ loss, as they entered something of an artistic wilderness in 1963. Meanwhile, both sides of this single eventually featured on the Temptations’ mix-and-match grab-bag of a début LP, Meet the Temptations, in 1964.