B-side of Contract On Love

Over the years, more than a few Motown acts have talked about how the possibility of writing their own material helped convince them to sign with the label. If proof were needed that Motown had an interest in the future career of Stevland Morris Judkins beyond a few kiddie novelty singles, a cursory glance over the two studio LPs released on Stevie in 1962 – The Jazz Soul of Little Stevie and Tribute to Uncle Ray – would reveal no less than 3 tracks co-written by Wonder himself, all before he had attained the age of 12.

Stevie’s second album, Tribute to Uncle Ray, is a mess; a shameless attempt on Motown’s part to cash in by strongly implying a link between Stevie and Ray Charles (the only other blind black musician most white listeners were probably familiar with), where in truth no such link existed: they weren’t related, Charles wasn’t his “mentor” as described elsewhere, as far as I know they’d never actually met each other. Yet the liner notes go to town: “Little Stevie Wonder, Tamla’s 11-year-old musical genius, is blind, a similarity he shares with a famed musician and vocalist of today!” Wow, really? Sell me a copy of this album right now, please!

The LP consists of eight extremely ropey Ray Charles covers that rarely rise above the level of karaoke, Stevie simply too young and unschooled (in every sense) to handle such weighty material – shades of Michael Jackson seven years later – with two new songs tacked on at the end. One of them is a conventional R&B number written by Berry Gordy (My Baby’s Gone); the other – this one – a looping, lolloping semi-jam written by Stevie himself, along with Clarence Paul, his producer and day-to-day “handler” at Motown. 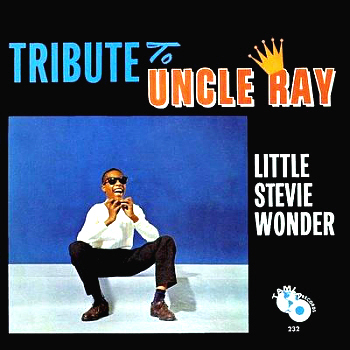 Sunset is for my money by far the best track on Tribute to Uncle Ray, only three minutes long but sounding twice that, all walls of shimmering percussion (kettledrums, cymbals, the works) and a rolling trumpet loop in the background, while Stevie’s melismatic vocals ride over the top. He gets a bit shrill in places, particularly when trying to pronounce certain words, and he’s at his best when he’s not bothering with lyrics at all, just making noises with his voice in the style of a female jazz diva, rather than a male tween – the song’s central vocal riff, Whoa, ohhh, it’s sunset, is one of its strongest features – but it’s captivating all the same, and the sax-led instrumental break at the 1:20 mark is surprisingly mature.

Not commercial enough to be a single, and I’d have been happier if he’d sung this a couple of years down the line when his voice had matured a bit, but it’s still a striking statement of intent from a young man determined even then to be taken seriously as an artist, and a fine note on which to end Motown’s fourth year.