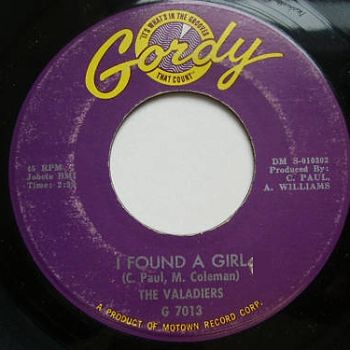 1963 – Motown Year Five – would prove to be a year of transition for the company, in which they would rack up more hits than ever before, but also release a massive slew of one-off singles from artists who were never heard from again. At the start of the year, the label was in the process of trimming, re-stocking and revising its roster, ditching a number of the blues and doo-wop artists from the early days and signing a whole bunch of new faces, many of them one-shot specials who didn’t make the grade and wouldn’t be around the halls of Hitsville for the end of 1963, when the company’s mid-Sixties “Golden Age” was starting to pick up pace.

At the end of 1961, Motown had indulged in a kind of cupboard-clearing exercise, shoving out all manner of records that had apparently just been lying around, recorded and finished but continually bumped back on the release schedules. Now, at the beginning of 1963, it was time to do it again. First up was this, a recording already over a year old and by a group that didn’t even exist any more.

The Valadiers were Motown’s first white vocal group, and had scored a (very) minor chart hit back in October 1961 with the tragicomic doo-wop number Greetings (This Is Uncle Sam). By 1963, though, everyone involved had long since gone their separate ways; the Valadiers had split, and only group member Marty Coleman was still at Motown by the time this single saw release, working as a writer.

Despite all of this, someone at Quality Control evidently thought I Found A Girl might have potential, and greenlit it as Motown’s first release of 1963. Indeed, they weren’t alone in thinking this record was a winner – I Found A Girl was also inexplicably among a chosen handful of Motown records selected for release in Britain at the time by the Oriole American label.

I’d love to know exactly what it was that they saw in it, mind you, because this isn’t very good at all. 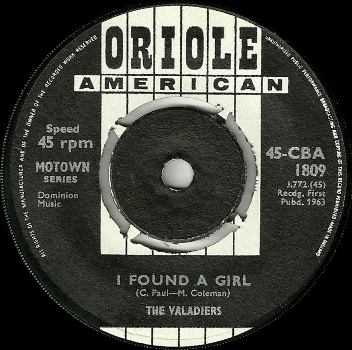 It’s not a terrible song per se – a thin, dated doo-wop dance number with trite, rhyming-dictionary lyrics, it’s still jaunty enough that in the hands of a capable group, it might have done great things three years previously – but the Valadiers’ stiflingly soulless, airless delivery drains the song of literally every last vestige of excitement that might once have been found in there.

It’s not just that it sounds “white” (although it really does), it’s that it sounds weedy, passionless, safe. When lead Valadier Stuart Avig sings the opening lines (and yes, these scan about as well on record as they read written down):

…he sounds as if he’s never heard the song before, and might as well be reading them off a teleprompter. Seriously, it’s among the most dispassionately awful readings of an “emotional” song I’ve ever heard. The rest of the group aren’t any better, either, their interjections flat and grating, their harmonies adequate at best.

Really quite poor indeed, and unforgiveably boring to boot, it would have struggled even in 1961, and even with an active group to promote it. Having been quite correctly left on the shelf when it was originally recorded, it’s utterly mystifying to me why this was ever released at all.