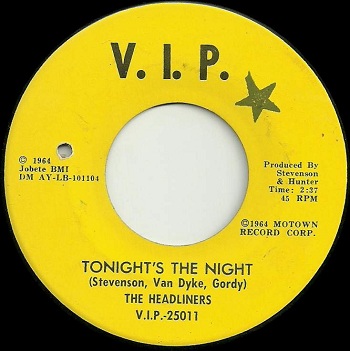 The Headliners were a white band from Florida, who’d previously recorded under the names “the Tornadoes” and “the Flying Tornadoes”. They were an eclectic bunch, their live gigs showcasing rock ‘n’ roll, folk, R&B, pop, country, show tunes and blues, depending on the occasion and their mood; this versatility got them their Motown deal, after an impressed Berry Gordy saw them play a set and excitedly signed them up on the spot.

When I found out they were a self-contained band, though, rather than a vocal group – according to The Complete Motown Singles: Volume 5 (not Volume 4 which actually contains this record), the lineup included future C&W Hall of Fame drummer Larrie Londin, as well as their own bassist, pianist, saxophonist and guitarist – well, that was rather strange. Listening to Tonight’s The Night, which is dominated by a demented tambourine and a rippling Hammond organ part, and then noting that Motown house band leader and keyboardist Earl Van Dyke copped a writing credit on this, I’d assumed the Headliners were just the singers here, but no, apparently not. Maybe Motown just replaced them with their own musicians, as was standard practice at Hitsville when some (or all) of the members of an outside band weren’t getting it done in the studio.

Anyway. This is kind of a mix between Van Dyke’s own recent 45 Soul Stomp and Marvin Gaye’s Baby Don’t You Do It, two helpings of bruising, repetitive, straight-up dance music. Which only goes to show how difficult it is to get this apparently simple stuff right – compared to those two singles, this one’s a disappointment.

There are a few excellent and surprising moments here; the falsetto call and response backing vocals call Frankie Valli to mind (in a good way), and there’s an unexpected instrumental break just after a minute in, where the guitarist goes briefly nuts (lead singer Bobby Lewis was the group’s axe man but I don’t know if it’s him doing that part) before the organ muscles him out of the way for a few measures of Van Dyke Hammond goodness. Those bits are great.

Otherwise, though, this is a tedious exercise. The Headliners’ harmonies aren’t anything to write home about, the vocals are muddy and indistinct, and everyone sounds bored, a lack of enthusiasm that can’t help but cross over to the listener too. Whoever the musicians are on this thing, the singers let them down.

Plus, there’s not really much song going on here, and while you could technically say the same for those aforementioned Van Dyke and Gaye sides, at least those were thrilling. Here, apart from the instrumental break, this feels like more of a plodding slog, and each new verse saps a bit more joy from your heart as it strikes up – oh, there’s more? You weren’t done?

Not completely terrible, it has its redeeming features, but if I find I’m impatiently waiting for a record to finish, then it’s not done it for me, I’m afraid.