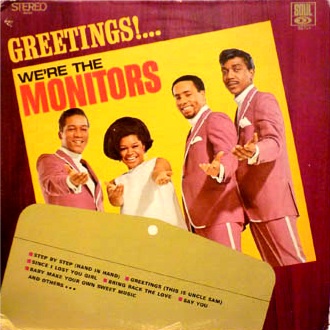 The Monitors (as that’s who this really is) struggled to get traction throughout their time at Motown; they never really had a big hit or a signature song like other so-called “second-tier” Motown acts (guys like the Spinners, Originals, Velvelettes or Elgins), and in five years with the label, they only had five released 45s and one lone album to show for it.

That LP, 1968’s Greetings! We’re the Monitors (above right), is where this cover of an earlier Temptations B-side eventually ended up once this proposed single was cancelled. It’s a stronger song than the planned topside, Hello Love (the Travel, travelling on bit remains, if you’ll pardon the phrase, majestic), but it’s also much more conventional, less risky, and in the process it loses a lot of the weird magic that marked these guys out as ones to watch.

The liner notes to The Complete Motown Singles: Volume 4 state this uses the same band track as the Temptations’ original version (which I’ve just noticed was exactly 200 reviews ago, coincidence fans), and that’s really rather unfair, for two reasons. First, because the Majestics/Monitors are saddled with an eighteen-month-old backing track, which – good though it still is – didn’t exactly set the world on fire on original release and hasn’t become stronger in the interim; the Funk Brothers had come on in leaps and bounds since then, and it would have been nice to hear their updated take on the material. But secondly, and more importantly, it’s unfair because it turns this into a direct comparison between the Monitors and the Temptations, and there’s only going to be one winner there.

As so often happens on this blog, I’m left wondering whether familiarity with a different version of a song has permanently clouded my ability to give other versions a fair hearing – in other words, I’m wondering what I’d make of this if I’d heard the Monitors’ version first, rather than the Tempts’ original.

I’m wondering because, well, I didn’t, and the ensuing comparison isn’t flattering. The original was one of the first times a producer (in this case the Monitors’ old pal Norman Whitfield, also credited as helming this remake) had managed to corral the Temptations’ various distinctive voices and get them harnessed together working as a dynamic group. The resulting enveloping harmonies lifted a pretty little song (I’m still not sure what the intro reminds me of!) into something much stronger – much more sweet and much more memorable.

The Monitors aren’t bad here by any stretch of the imagination; they use a sparser arrangement, not so many backing harmony parts, and the lead vocal’s pacing is different (which makes it sound like they’re taking the song slightly faster) but still actually really nice… but it just reminds you at every turn that, hey, that isn’t Paul Williams, these aren’t the Temptations. Missing the magic of the Tempts, and the mystique and curiosity of the A-side, we’re left with a solid, entirely respectable cover version. If only I hadn’t heard the Temptations’ version so many times already…?

Listening to it afresh, as best as I can manage, this stacks up well enough. It’s still a good song, and it still makes for a good record – but the existence of a better previous version means this is reduced to being a bit of a pointless do-over. Not the last time we’ll be saying that on Motown Junkies, that’s for sure.