B-side of When I’m Gone

B-side of When I’m Gone

(Released in the UK under license through EMI / Tamla Motown)

Waters muddied yet further. Just as I’m wondering whether maybe Brenda Holloway was just a great singer who for whatever reason wasn’t a great interpreter of other people’s records, along comes I’ve Been Good To You, which sees Brenda again saddled with someone else’s song, a song palpably not crafted for her. She doesn’t quite manage to make it work, but she makes it hers, which is almost as good.

Here, as with the A-side When I’m Gone, Brenda is handed an old Smokey Robinson song – a really old Smokey Robinson song in this case, first recorded by the Miracles for a B-side back in 1961 – and, again, when presented with something that wasn’t written with her in mind, the fit is awkward, like a glove that’s slightly too small. You can force your hand in there, it’ll keep you warm, but you’re constantly reminded it’s not quite right.

All that being said, though, I was no great lover of the original (this is the first Motown single where the songs both sides have already previously appeared on other Motown singles, trivia fans), a pretty but inescapably boring doo-wop ballad. It’s not immediately obvious quite what prompted Motown to dust it off and give it to Brenda (and, indeed, to add it to the standard repertoire – there are some more covers of this still to come on Motown Junkies as we make our way through the Sixties), but this version is very different from the original. Indeed, there’s a strong argument to say it’s the better record. But in remaking it like this, Brenda and her California producers add new flaws in the process of smoothing out old ones, and so it still ends up unsatisfying. 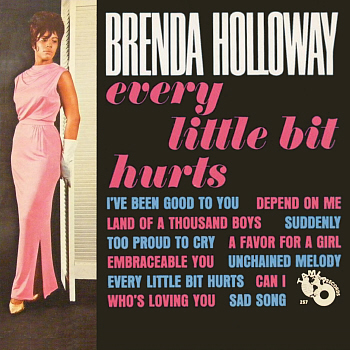 It sounds good, there’s no doubting that. The original had sounded good too, of course, but this remake is a cut from Brenda’s one and only Motown LP, Every Little Bit Hurts (left), a rush-job album full of slow-burning West Coast productions drenched in strings, designed to show off Miss Holloway’s remarkable voice. If it’s a shame this wasn’t recorded in Detroit, denying us the opportunity of hearing what progress had been made since 1961 – both the band and Smokey the producer had tightened up their game since then, and Smokey had matured as a songwriter, comfortably correcting earlier mistakes given the chance of a do-over – well, it still sounds great, bearing little sign of the haste with which it was recorded.

Brenda is both the best and worst thing about this record. Her voice is excellent, exhbiting both power and range that her labelmates could for the most part only dream of. The song doesn’t have a chorus, as such, but the end of each verse kind of serves that purpose in a way, as Brenda is asked to lead us into the song’s only real hook, the repeated refrain “I’ve been good to you”. Each time she gets there, she doesn’t even prepare herself, never mind us, instead just reaching deep inside and blasting out a surprising vocal volley – make me BLUE! – which rocks the listener back on their heels. When, at the two-minute mark, the music crawls to a momentary halt and Brenda has to carry the entire weight of the song on her own, and she belts out

…with the softest “yeah” under her breath moments later, it’s just an incredible moment, and worthy of a couple of marks all by itself.

But the gods of pop music are fickle, and what they give with one hand, they take away with the other. The biggest problem I have with the A-side, When I’m Gone, a vocally spectacular but emotionally lacking cover of an old Mary Wells record, is that Brenda too often sacrifices emotional impact for the chance to show off her superb vocal talent, swinging straight for the fences whenever the opportunity presents itself, and to hell with the tone of the song. And so it is here.

For I’ve Been Good To You, the frequent outbursts of volume and melisma are much more appropriate – this is a song of pain (and, unlike the original, it’s recognisable as such), and Brenda’s version brings out the blues in it where Smokey failed – and so it works better as a record. Indeed, of the two sides of this single, it’s this flip which reminds us Holloway was a particularly clever songwriter in her own right, because she’s taken something substandard and made it work in the only way she knows how: making it big, making it loud. But it’s still impossible to escape the nagging feeling that emotion has been traded for technique, rather than amplified by it; there are still wails here, but they don’t feel like wails of pain.

Perhaps too many Nineties and Noughties “soul” singers have ruined this kind of big, melismatic vocal for me; perhaps it’s something akin to my well-documented issues with the saxophone, which I always struggle to get over. All I know is that, while it’s impressive – and it is impressive, so much so that during the time I’ve been writing this review I’ve decided it’s definitely better than the original – I don’t know if I’d be any more or less impressed by this if it were sung in Korean.

I still like it, and as a vocal showcase it’s absolutely remarkable. But despite the sheer power and skill on display, it still feels more like a demonstration than a great performance. Or maybe it’s too much of a “performance”. Unlike the A-side, it feels as though it’s the song’s fault, not Brenda’s, but it’s still more wallpaper than signature tune. I can appreciate how skilfully it’s been made, but I get no emotional connection from it, it doesn’t move me, and ultimately that’s what I want from a pop record, no matter how astonishing the lead vocals are.